The Dani, Yali and Lani tribes gather at this annual festival dressed in distinctive attire to stage mock battles, perform traditional music and dance, and celebrate with a pig roast.

The differences between Papua and the rest of the country are stark, starting with the appearance of the Papuans themselves, who are ethnically Melanesian, but comprise of several tribes who speak over 250 different languages. Few Papuans actually follow a modern life-style, and a further difference is that Papua does not have the Islamic heritage pertaining to most of Indonesia.

So, when you are traveling across the Baliem Valley, Papua, you might be forgiven for feeling that you are no longer within Indonesia. Cannibalism and head-hunting continued to be practiced in Papua right up to the 1970’s, and the region is still considered to be well behind modern times, having been described as “20th-century Stone-Age” upon discovery.

West Papua has been well known for its beautiful nature. That is especially for some places there which are more than beautiful. It is including Baliem Valley which is amazingly adorable so that it can be one of the must visit places when you go to West Papua. We have described the nature of this place which is really amazing in brief above.

This place is completely that attractive with Baliem River which separate Valiem Valley. The river flows to Grand Valley and then it empties to Arafura Sea. Baliem Valley offers the beautiful nature which can make the visitors feel amazed. You will see not only the adorable yet dashing mountains but also in the height, you can see the fields of the residents there which often look so green, fresh, yet refreshing. It becomes perfect with its cool temperature there. You will feel peaceful, refreshed, and of course feels much healthier because we get the fresh air there.

Trekking is the reason for which most people head to Baliem Valley. Baliem Valley trekking not only provides fantastic views over the valley, it’s rivers and lush landscape, but is the best way (and in many cases the only way) of coming across members of the different, remote Papuan tribes.

There are few to no roads outside of Wamena so the more remote parts of the Baliem Valley, and areas outside of it can only be explored on foot.

Costs for Baliem Valley trekking expeditions with guides are often incredibly high and prohibitive to most people traveling on a restrictive budget. Although hiking some parts of the valley in the village area without a guide is possible, hiring a guide in this region, one who knows the area and is familiar with tribal customs and dialect, is highly recommended.

Tribal warfare continues to be practised in the valley and conflicts are common, and although this is not directly targeted at tourists, the risk of getting caught in a cross fire is high, especially if you are not aware and familiar with your surroundings. The situation could potentially become very dangerous and indeed, during our time in Wamena, guides were refusing to take trekkers to one particular area of the valley because of some violent incidents pertaining to tribal conflict.

What is so particular about villages in the Baliem Valley? 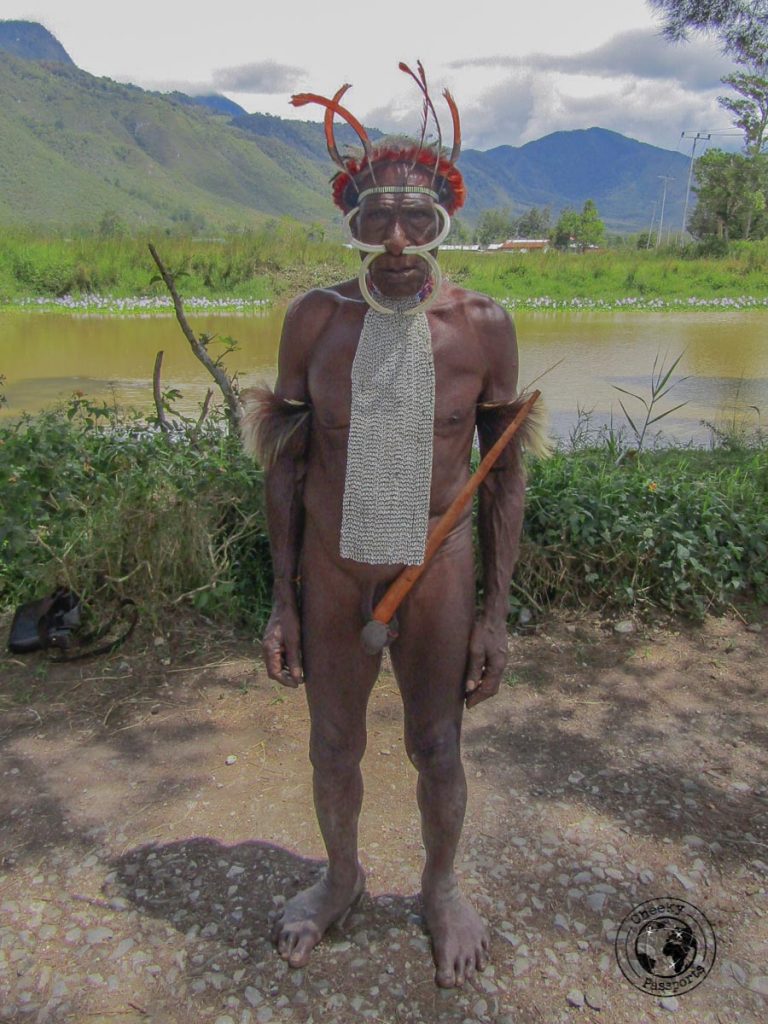 Males traditionally wear a Koteka to cover their penis, and little else. A koteka is a penis sheath made from dried gourd (yes, the vegetable) and is normally tried to the scrotum. The idea of this contraption made Nikki squirm and he wasn’t sure whether he would feel comfortable spending much time with the tribes wearing such attire.

The way in which a man wears his koteka can give an indication as to what tribe he belongs to, and different kotekas are worn on different occasions. Admittedly, I found it hard to meet the villagers on our independent Baliem Valley tour without staring at their kotekas since I found it to be such a weird item of clothing. I felt embarrassed for staring so intently at their private parts, but they did not seem at all bothered! Nikki did fine too 😉

Women are often bare-breasted and wear grass skirts as do some of the children. 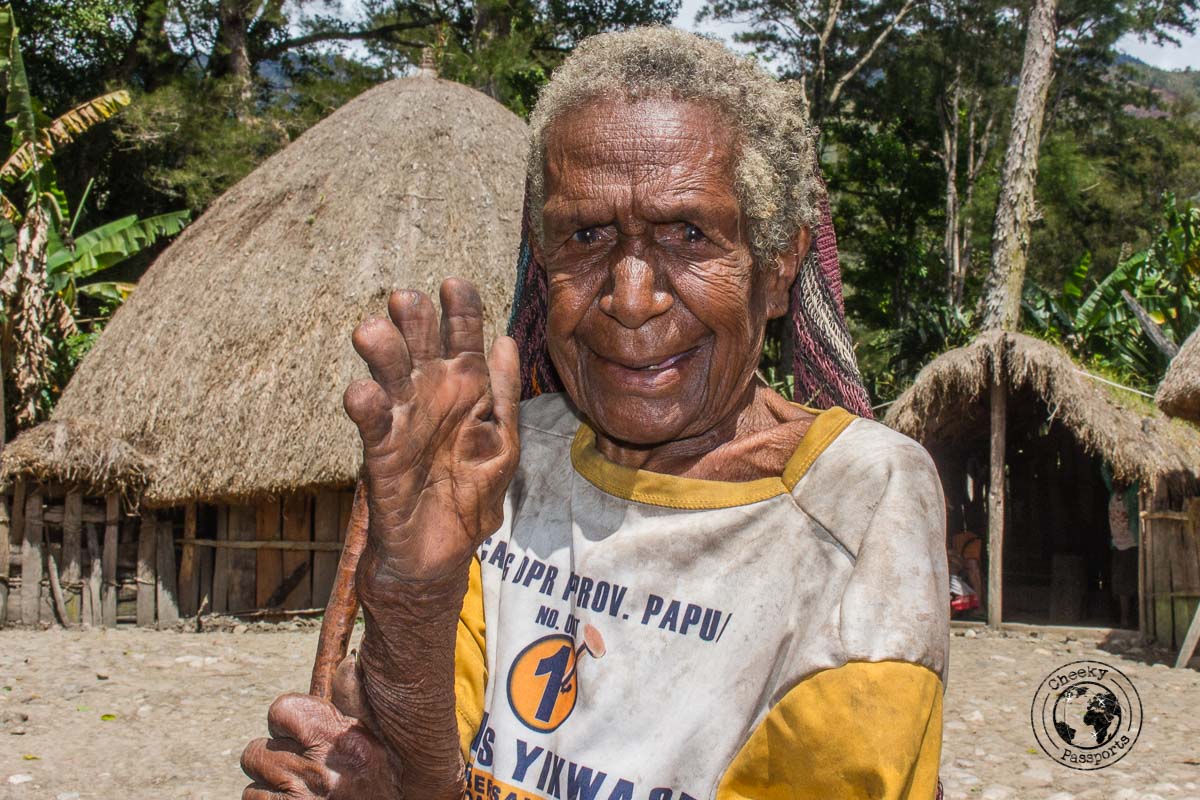 You will notice that many of the older women in Wamena and in the villages of the Baliem Valley are missing some of their fingers. The ancient practice (which is now banned) sees a woman having her fingers amputated to mark the loss of a relative, symbolising the pain after the loss. It was normally performed by a village ‘specialist’ using a straight-edged stone, after striking the woman’s elbow with a stick to numb the nerve, and thus reduce the pain of the procedure. The chopped-off finger is burnt along with the body of the deceased.

Things to know before you travel to the Baliem Valley

This is essentially a travel permit which you need to purchase to access some spots in Papua. You can obtain the permit from the police authorities in some cities in Papua such as Jayapura and Sentani. The permit can also be made in Wamena itself and will allow you to travel in the Baliem Valley. We always intended to make the permit at the Wamena Police Station, but kept forgetting to do so every time we passed by.

We were not sure whether it was mandatory to have a permit or not (due to conflicting information) when staying in Wamena, but it seemed to be required mostly for going outside of the main town. The permit SHOULD be free of charge, but it is not uncommon for a fee to be charged. If you need the permit, bring along two passport photos. You need to list every place outside of Wamena that you intend passing through, which sounds like quite a hassle if you are planning a long trek.

Once you have your permit, be sure to make several copies of it. When you arrive to the main town of the regency you are passing through, head to the local police station with your permit to be registered.

March – August sees less rainfall, but it can rain at any time in the Baliem Valley and rain should not be a deterrent to your plans. Be sure to carry around a good thin waterproof rain jacket in Wamena, and a thicker jacket if you are trekking to a higher altitude where the nights tend to be very chilly.

Renting a scooter for an independent Baliem Valley tour

Scooter rentals are awfully expensive in Wamena, and very difficult to find. Our guesthouse owner arranged our rental from a friend and this was only possible after asking around a couple of days. None were available before. The rental set us back 250,000 IDR (about €15) a day which would be an outrageous price anywhere else in Indonesia, but actually a good deal in Papua, where everything is so much more expensive. The scooter was sparkling new! 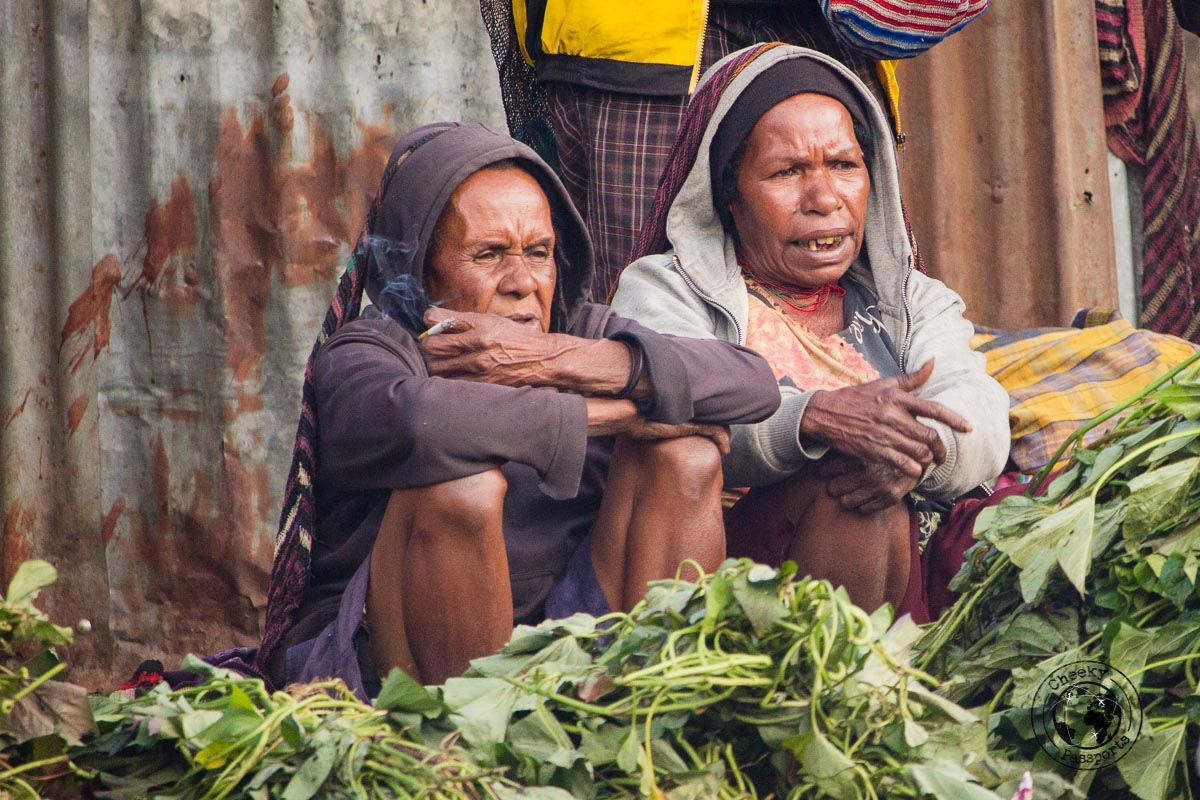 There are very few places which are still unexplored on our planet. The Baliem Valley is probably not one of them, but the area surrounding it may certainly be! Even now, in the 21st century when travel has been made so easy, visitors to Papua are few, and not many people make it to the very remote tribal lands.

Although we didn’t get to go too far out of Wamena, the Baliem Valley has got to be one of the most special places that we have traveled to, and this thanks to the unique culture that makes the region so incredibly rich, and colourful. If you’re looking to travel to one the world’s last frontiers, Wamena would make a good base!